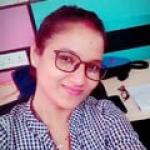 Harshita is a Senior Consultant at DIS Practise. A passionate technical consultant driven towards exploring latest technologies in S/4 HANA. Her knowledge spans around Odata, CDS Views, AMDPs and implementing best HANA Practices across projects. Adding to all this, she is a technical writer of various SAP blogs and also an author of the novel "Shades of Adolescence"

Artificial Intelligence: It is the talk of the town that perhaps each and every emerging technology wants to embed. We have all heard of Alexa, Siri etc.; the interactive robots that assist customers and these have emerged as stepping stones in AI.

Thus, moving hand in hand with technology, SAP has already introduced Conversational Artificial Intelligence which is a powerful digital assistant designed for organizations.

As you can see in the topic itself it is a powerful bot building platform that helps you build and deploy conversational agents in your application. These agents are programmatically designed to provide a powerful end user interaction. It provides a web user interface that serves as a platform to create, build and test chat bots. It is indeed automation.

Though SAP has successfully created brilliant and user friendly user interfaces with robust FIORI applications; embedding them with conversational interfaces proved to be cherry on the cake. This has streamlined to provide a far better and smoother user experience. Smart chat bots allow user to get immediate and directional responses to their queries about particular applications. They can also greet customers as if a real life agent would be attending them.

What are Chat Bots?

The above points might sound tricky but they are very easy to implement!

AN OVERALL MODEL OF A BOT 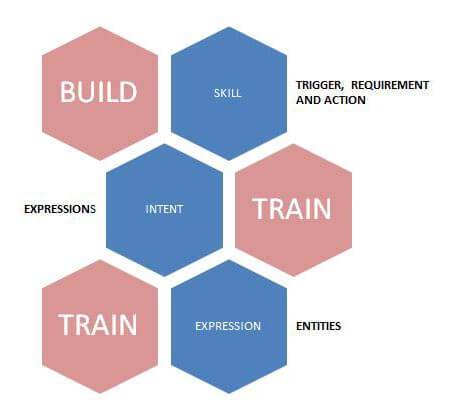 An Example of a BOT – A Simple digital Assistance!

We will quickly see how to create a simple chat bot as above.

Purpose: This chat bot will tell the user the different landscapes of SAP systems.

We go to https://cai.tools.sap/ and register here. 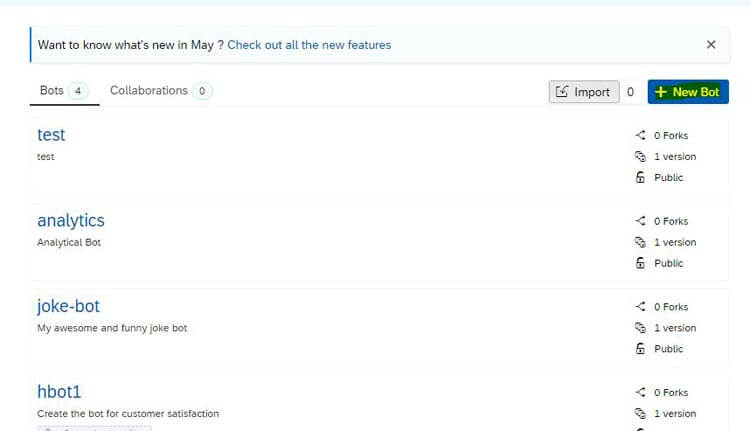 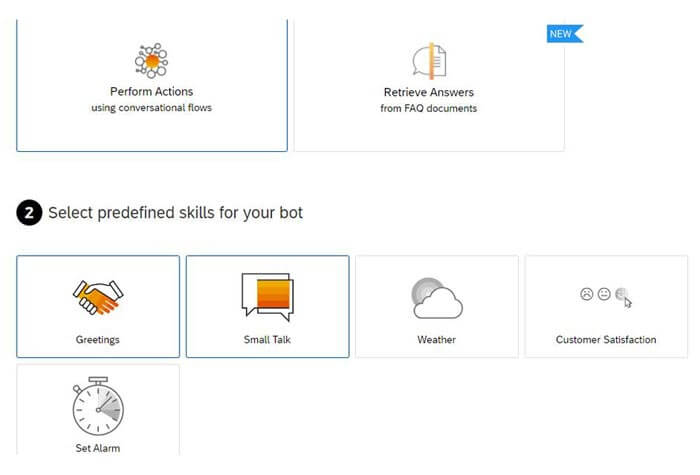 We give a name to the chat bot, its purpose.

We provide the data policy as per security reasons. It shows that the chat bots are secured too. 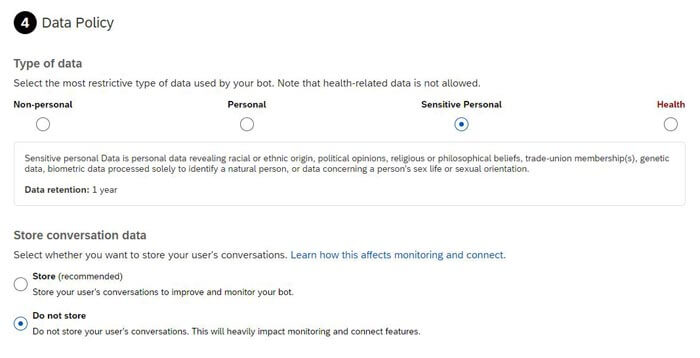 Select the visibility of the bot and create the bot.

We land on a page where we have to give intent to the chat bot. As we have selected skills as Greetings and small talk, so our first intent would be expressions related to greetings.

SAP has already provided some pre build skills in which @greetings is one of them.
If we select build, we are given two skills that we have selected for our chat bots. These are: 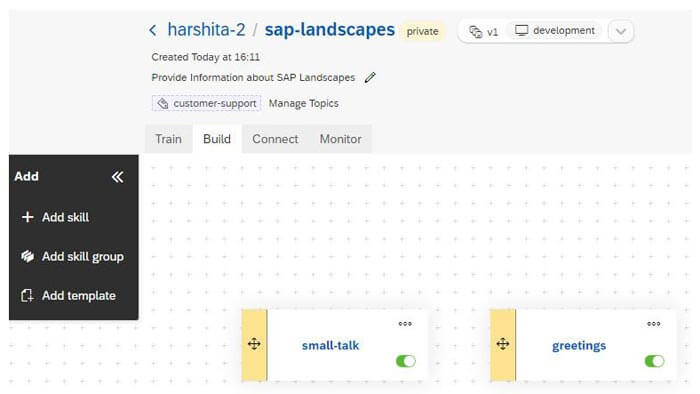 We can add more skills over here too.
If we talk about greetings, all the concepts that we read earlier are clearly visible: 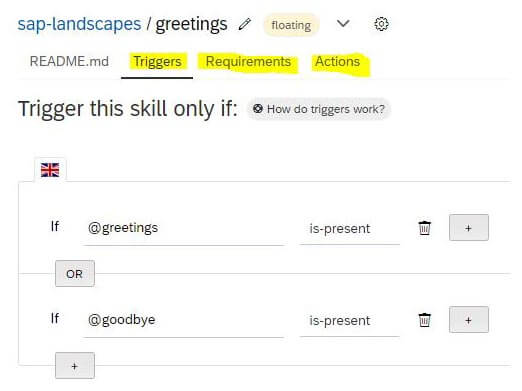 Triggers            : When user greets the chat bot that will be the trigger point.
Requirements  : There is no requirement as such here.
Actions             : Once the trigger is executed, the actions are performed which in this case is greeting the user back. We can also edit these messages. 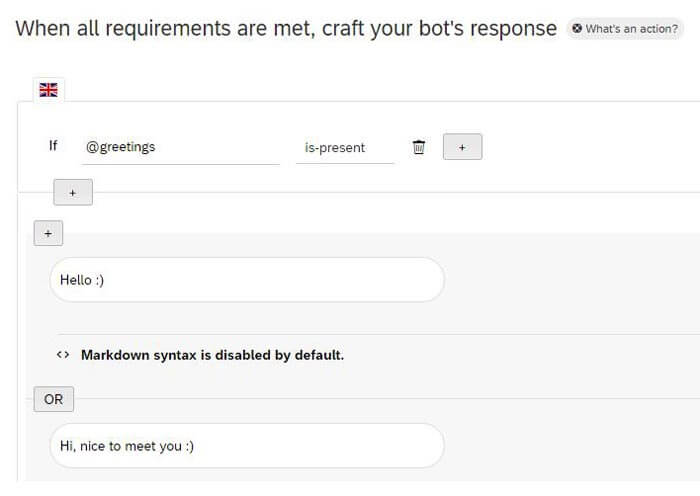 ADDING A NEW SKILL TO THE BOT 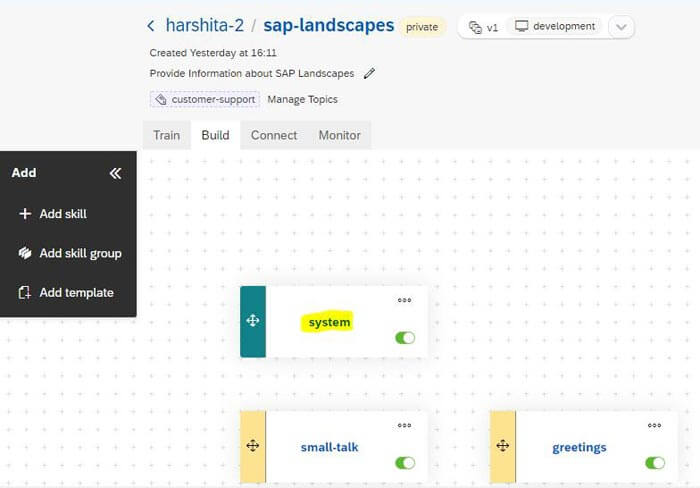 Just adding skill won’t make the bot intelligent. We will have to train it. We would have to add triggers and actions to it and create intent as all those expressions that have a similar meaning that the user would probably ask for in this particular skill.

Conversation that can be asked from the user:

And all such cases.

ADDING AN INTENT TO THE BOT

Let us create intent for the above skill.

ADDING EXPRESSIONS TO THE INTENT:

Once we create intent, we have to add expressions into it which will contain similar meaning.
Here we have added three expressions to the intent.

For training the bot, we need to create Entities:  As already discussed earlier, an Entity is a keyword that is chosen from the expression and extracted to predict the intent available. 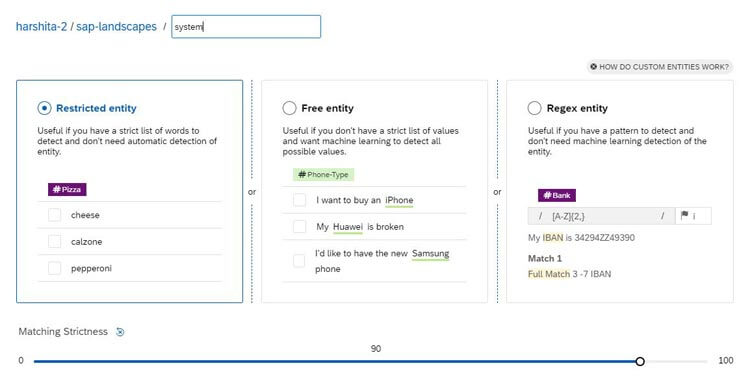 Once the entity is created, we go to the intents and we select or extract the keyword from the expressions. Below we have marked systems as the keyword. 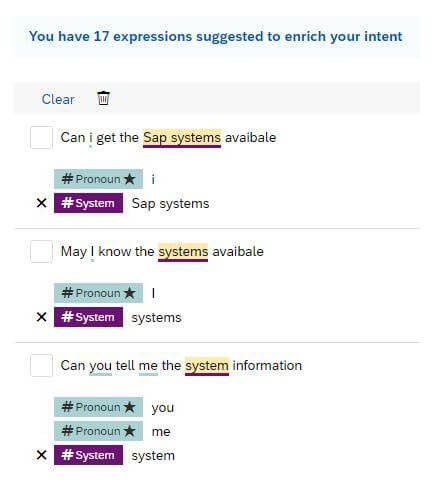 Now, as we are done with creating the skill and training it, we also should determine when it should trigger. For that, we need to create the trigger point.

So, we go to the Trigger and select the requirements for the skill.

We go to requirement of this skill, and add that if an entity system is present as a request, that means if a user requests this skill, what all can be the replies. So, we create replies in the requirements.

Once the user requests a particular requirement, we would choose a message to reply back to the user. SAP has provided a lot of available message types. We choose text as of now.

Our bot will ask the user which system Information he really needs and we shall provide him options as HANA, ECC and FIORI. Along with each option, we write the text as predictions as to what the user would answer. These set of predictions make another INTENT user_system with its associated expressions and entities. 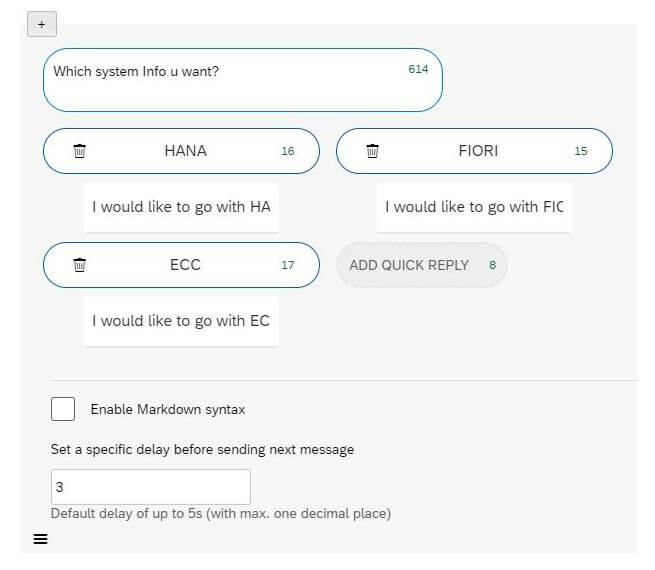 ADDING ANOTHER INTENT AND ENTITY TO THE SKILL:

In order to predict user response, I have created @user_system as a new Intent with the below possible expressions. 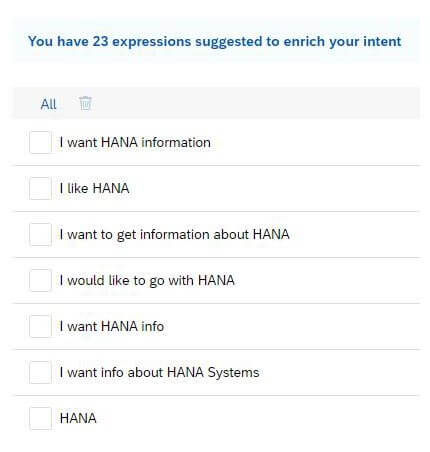 And a new entity HANA, with each of the above expression mapped with an Entity which would help determine the INTENT from user’s answer. 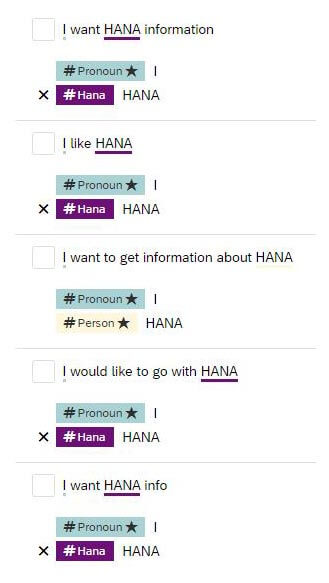 After making a new intent and entity for the user’s reply, we map the same in the requirements while building the BOT and if these questions asked have the user reply matched with the intent, the BOT would answer with the exact Systems.

BUILD THE BOT: MODIFY THE REQUIREMENTS: 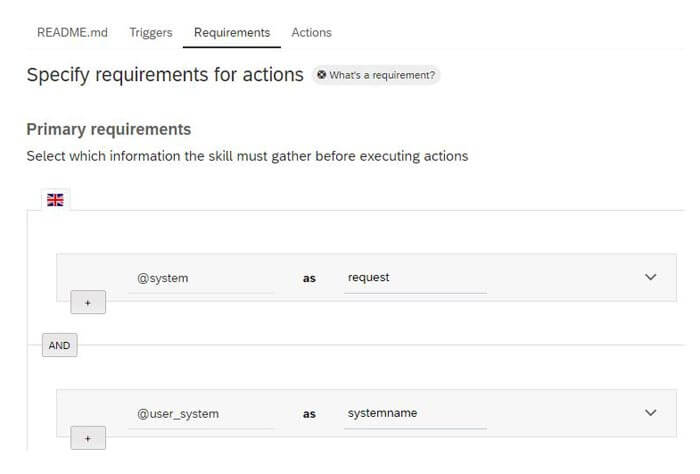 BUILD THE BOT: DEFINE AN ACTION:

Action: When the above requirement will be met, we will provide an action that would answer the available system user has selected.

After training the BOT well, let us test the BOT. 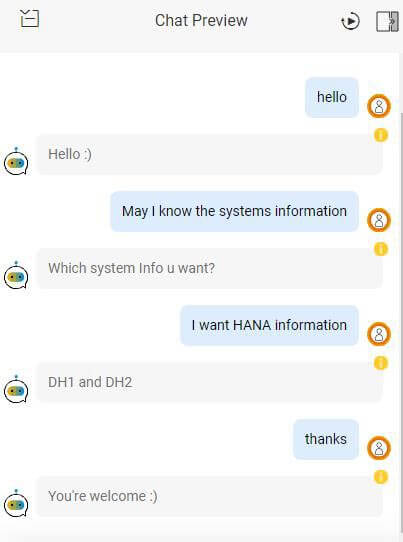 Cool! After training my BOT with the required skill, my BOT is intelligent and so user friendly!

With such an advent of technology, SAP Conversational AI is building a significant mark in the markets and among SAP Users across the globe!

We are professional and reliable provider since we offer customers the most powerful and beautiful themes. Besides, we always catch the latest technology and adapt to follow world’s new trends to deliver the best themes to the market.

Taking Your Vendor Invoice Management Solution Up a Notch